To Celebrate Marcia's Birthday
Members of the Mary's River Quilt Guild
Made Bears Paw Quilt Blocks
with Civil War Reproduction Fabrics.
Just thought you might like to see Marcia with her Quilt Top: 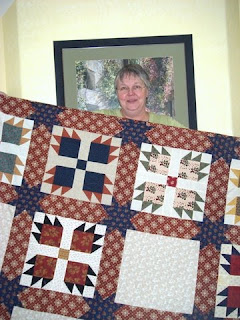 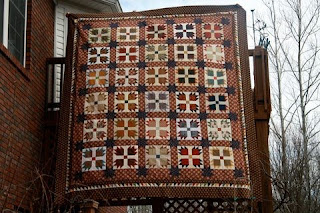 The quilt needed to be adjusted to fit the bed and borders were added when Marcia went to Kentucky. They were able to add the half square triangles to the border as we had originally planned. Here is the beautiful result.

Posted by LuAnn Kessi at 6:56 AM No comments:

CLICK HERE to visit Karen Miller's Website
CLICK HERE to see the February Block of the Month Pattern
See you at the next meeting:
Thursday, February 24, 2011 7:00 pm
Benton County Museum, 2nd Floor
Philomath, Oregon
Mary's River Quilt Guild
General Meeting Minutes
1/27/11
Lisa Ullmer, President, called the meeting to order at 7:05 PM.
Ms. Ullmer conducted the Guest Roll call. There were six guests.
Ms. Ullmer announced that a friendship blocks for departing Treasurer Joan Helzer will be made; the colors will be red, green and gold.
Priscilla Newberger, Treasurer, informed the audience that she needed forms for everything including submissions for reimbursement and dues payment. All of the forms can be found on the Mary's River Quilt Guild Web site.
Ms. Ullmer announced that Karen Miller, a guild member, would be presenting after the business portion of the meeting. Her presentation is part of the agreement for the Cutler-Hayes Scholarship which Ms. Miller received last year to help pay for a trip to Japan to learn about Fabric arts there. Ms. Ullmer also mentioned that if anyone wanted to apply for the scholarship they should submit an application (on the Web site) to Corey Arentz, Vice-President).
Ms. Ullmer reminded everyone about library policies.
Lynne Grube, chair of the Service Committee, reported on the activities of the committee for the 2010 year. There were 20 guild members who helped with binding and quilting of service quilts and 47 quilts had been given to Community Outreach. Ms. Grube reported that the committee conducted an inventory and found that they had 89 completed quilt tops and that the committee would work on getting those quilted and bound before starting to piece anymore new tops. The committee also was credited with 954 volunteer hours for 2010 and significant monies from the sale of fabric at the guild meetings as well as through the OSU Folk Club Store.
Challenge Quilt - Judy Juntunen announced that the fabrics for the challenge quilt were reordered and if anyone was interested in purchasing more of them they could be found at Jannilou's Creations.
2012 Raffle Quilt - Theresa Valentine reported that there was an design meeting today and that a group of members would be looking into fabric and color choices soon.
Ms. Valentine also requested that members sign-up for the set-up and break down of the meeting space for the monthly meetings. She passed around a sign-up sheet.
Cindy Graff reported that Round Robin (round 1) pictures were posted to the Mary's River Quilt Guild Blog.
Jan Andrews reported that Secret Sisters had their first meeting in January and that the group was having a lot of fun and that there were five new members this year.
Ms. Ullmer reported for Marcia Gilson that Quilt County planning was well under way and that the Birkenstock window downtown would be devoted to Quilt County for the Month of August. Additionally the deadline to sign-up to curate a show is approaching.
Quilts in the Garden - It was requested that people will need to sign up to take charge of gardens for the Quilts in the Garden tour. The gardens are all down town this year and transportation will be provided between gardens.
Block of the Month - Joan Helzer conducted the block of the month drawing and let the group know that the February Block pattern is on the Web site. Additionally, Ms. Helzer informed the group of a new twist to the Block of the month. If the winner completes the quilt (quilted and bound) by the January 2012 meeting, their names will be put in for a drawing for a gift certificate to a quilt shop. The January 2012 deadline is in effect for all months for 2011.
Hospitality - Dianne Jackson conducted the Hospitality drawing. A $10 gift card to Creative Crafts and 2 fat quarters for the February block of the month were awarded.
Show and Tell was conducted.
Maryanna Negley introduced the speaker for the evening - Karen Miller. Ms. Miller spoke about a recent trip to Japan where she learned about styles of fabric printing and dyeing.
Ms. Arentz adjourned the meeting at 8:45 pm.
Submitted on 02/02/2011 by Erica Koenig.
Posted by LuAnn Kessi at 7:47 PM No comments: