Ms. Ullmer announced that there were six guests and asked them to introduce themselves.

Priscilla Newberger, Treasurer, announced that she will not be attending the June meeting

Ms. Ullmer announced that guild member Marnie Ross passed away on May 6th. A

condolence card has been sent on behalf of the guild.

Maryana Negley, Chair of the programs committee, thanked guild members who signed up

at the April meeting. Ms. Negley is also in need of a co-chair for instances in which she is

out of town or otherwise unable to attend meetings. The programs have been set for the

the speaker and presentations at the meetings.

approximately 60 of the 100 quilts for Community Outreach. She also reminded the group

of the no-pressure Round Robin possibilities for the service committee. Judy Juntunen

quilts from the service committee.

Quilt is “Sunset over Mary’s Peak.” The quilt will be a log cabin quilt and packets will be

ready for members to pick up next month.

Ms. Valentine also requested that members sign up for set-up and take-down at meetings.

during the quilt show.

- Ms. Gilson announced that the Sisters Drugstore show has room for

approximately 80 quilts of moderate size, and that there will be opportunities to sell

raffle tickets at that show. The quilts need to be brought to the next general

meeting or dropped off at the Wine Vault. Also a 10% donation to the guild was

requested from any quilt sales at the Sisters show.

- Ms. Gilson and Diane Jackson reported on Quilts in the Garden, scheduled for

raffle tickets at the gardens are needed.

Joan Helzer conducted the Block of the Month drawings for May. Ms. Helzer also showed an

example of the Block of the Month for July.

Debbie Garvin conducted the Hospitality drawings for May. One $10 gift certificate and a

set of fat quarters were given away. Ms. Garvin also reported that there had been a new

and prospective members get together prior to the meeting and that it went well.

Hilde Morin presented a variety of quilts and discussed her techniques.

The meeting was adjourned at 9:10pm

Posted by LuAnn Kessi at 7:06 PM No comments:

Quilt County 2011
is including an exhibit of
Alzheimer's Priority Quilts
You can be a part of this Exhibit !
Please create a tiny quiltlet no larger than
9 x 12 inches.
(It must fit into a 9 x 12 Priority Mail Envelope)
Marcia Gilson will be thrilled to receive a tiny quilt from all of our members to be included in the Quilt County exhibit this summer. 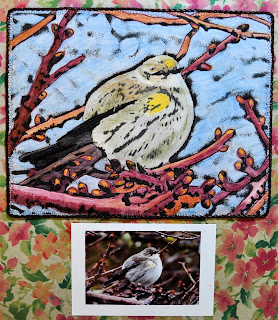 " Sparrow "
8.5 x 11 inch
I am donating this quilt for display in Quilt County this year.
After the exhibit the quilts will be sent to Ami Simms
and auctioned off as
Alzheimer's Priority Quilts
Your donation quilt will only take 2 or 3 hours of your time: 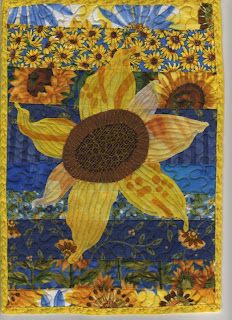 " Leftover Sunshine "
9 x 12 inches
I used scraps leftover on the cutting table to create this sunflower quilt.
The background is a leftover rail fence block.
The flower petals were leftover from my previous quilt.
It took no time at all to put this together... 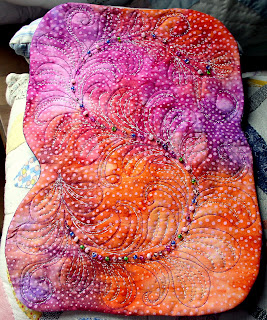 " Glitter for Gramma "
9 x 12 inches
This is a wholecloth quiltlet.
It was leftover from a class I taught on free motion quilting and beading.
No need for it to clutter up my sewing room, so I sent it off to
Alzheimer's Priority Quilts.
It sold at auction for $45 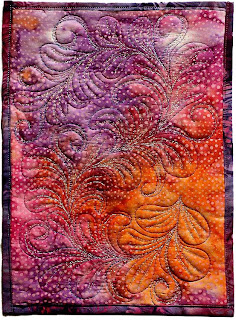 " Glitter for Gramma 2 "
9 x 12 inches
Yes, another class sample that was laying around the sewing room.
It sold during the Alzheimer's Priority Quilt Auction
for $40
There is very little expense and time involved in creating a
Priority Quilt.
Think of it as an opportunity to play with your scraps,
practice some impromptu design work,
and have a quilt ready to display at Quilty County this summer!
CLICK HERE for a FREE Tutorial
CLICK HERE to Read The Rules
CLICK HERE to see LOTS of Priority Quilts (Lots of Inspiration)
Bring your completed Priority Quilts to Marcia Gilson at MRQG meetings.
Watch this one minute Slideshow
Posted by LuAnn Kessi at 6:00 AM No comments: 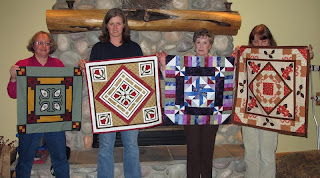 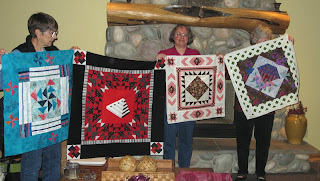 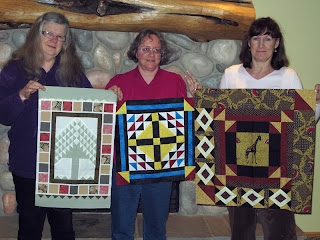 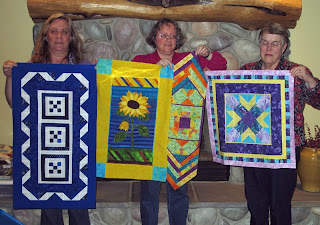 Posted by LuAnn Kessi at 2:27 PM No comments: