Ms. Ullmer announced that the February meeting had been canceled due to the weather. The speaker for February Karla Alexander will be speaking at the August 2011 meeting.

Ms. Ullmer announced that there were now 101 dues paying members of the Guild and approximately six new members for the 2011 year.

Ms. Ullmer had several other announcements:

- She welcomed Wolfgang Koenig to the Guild family. He is the new son of Secretary Erica Koenig.

- She publicized the “Just One Star” project from Moda. The project aims to collect as many star blocks as possible to be turned into quilts for service members. The blocks should have either a red or a blue star and a light back ground. The pattern can be found at http://www.unitednotions.com/LA_just_one_star.pdf or through a link on the Mary’s River Quilt Guild website.

- She also reminded Guild members that the Ms. Koenig has Guild note cards for thank you notes or other types of notes, please contact Ms. Koenig if stationary or note writing services are needed.

Maryanna Negley announced that she was looking for volunteers to act as hosts for speakers as necessary. She passed around a sign-up sheet as she would like a list of possible hosts.

Jean McDaniel announced that the Library had three new books and the most recent America Quilters Society magazine. The books are on the topics of Japanese style, hand applique and embroidery, and a book on embellishments. Ms. McDaniel also notified attendants that the Annex (where the library books are stored) will be having an open house on April 16 (Saturday) from 10am - 2pm. She indicated that an e-mail reminder will be sent out closer to the date. Additionally, Ms. McDaniel reminded members that the list of library book is on the website and that if someone has a specific book request that they should contact her prior to a meeting and she will retrieve the book from the library.

Ms. Ullmer announced that Judy Juntunen reported that there were still Challenge Quilt packets available, and that there would be a prize for most interesting color name.

Shirley Strub announced that Raffle Tickets packets for the 2011 Raffle Quilt are available. The packets are valued at $10 and contain 12 tickets. Tickets are $1 per ticket or 6 tickets for $5. Ms. Strub announced that the Quilt, which was on display at the meeting, would be hanging at JaniLou’s during Quilter’s Safari, and that volunteers were needed to sell tickets. Ms. Strub passed around a sign-up sheet for volunteers.

-Ms. Gilson reported that there are shows for Quilt County that are still open. She listed several shows and more information will be published in the newsletter.

- Ms. Gilson also reported on Quilts in the Garden, scheduled for August 27th from 10m - 2pm, information about locations and volunteer opportunities would be published soon.

- Ms. Gilson announced that in the May newsletter there would be more information on the Sisters Drugstore show. The show has room for approximately 80 quilts of moderate size.

Ms. Ullmer reported that the Round Robin and the Secret Sisters groups were meeting and having lots of fun.

Debbie Garvin conducted the Hospitality drawings for February and March. Two $10 gift certificates and two sets of fat quarters were given away.

Ms. Negley introduced the speaker for the evening. Naomi Weidner is a guild member and is a photographer who makes photos into quilts. She discussed her techniques.

The meeting was adjourned at 8:35pm

The Round Robin Group
had their big REVEAL...
Round 2
The center blocks now have the first border added: 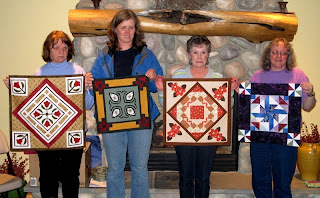 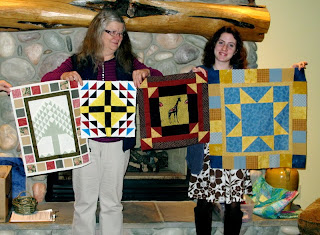 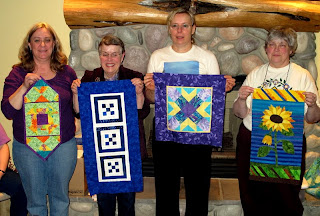 Group 4
CLICK HERE to see the previous post
We look forward to seeing the next round!
Photos Courtesy of Naomi Weidner
Posted by LuAnn Kessi at 2:07 PM No comments: 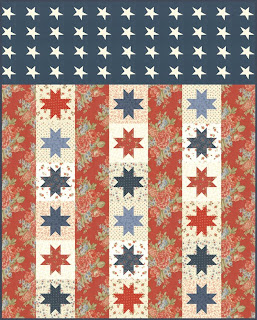 Please take a few minutes to piece Just One Star block
" many hands make light work"
CLICK HERE for the Star Block Pattern
The deadline for the star blocks is
May 1, 2011
Mary's River Quilt Guild
Posted by LuAnn Kessi at 8:47 AM No comments: