Welcome to the October 2011 Meeting
Mary's River Quilt Guild
Philomath, Oregon
Tonight was the BIG Reveal of our
2011 Challenge Quilts !
Sit Back, Relax and Enjoy the Slideshow:

The meeting was called to order at 8 PM by President Lisa Ullmer.

General Announcements Made by Ms. Ullmer:

Ms. Ullmer advised that there were four visitors and they were invited to introduce themselves.

The Program chairs resigned for personal reasons which will push the annual auction until spring next year. November’s meeting will now include an ugly fabric exchange and members are invited to bring something that they consider ugly to exchange for another fabric. November is also our service month and there will be several tables set up to tie quilts.

Theresa Valentine and Peggy Peirson have volunteered to work on programs for the coming year.

Marketing for the raffle ticket sales will be split into venue segments, allowing guild members to take leadership for specific venues and the presentation of the 2012 raffle quilt and ticket sales.

We are still in need of a person / group to head the 2013 raffle quilt design and creation process.

Lisa asked that the quilt county banners be returned to her.

An announcement was made that former guild member Marion McNamara will be visiting from her Peace Corps assignment in Armenia on December 19th from 5 to 9 PM at Fire Station Five.

Judy Juntunen introduced the 2012 challenge quilt title, Traditions With A Twist; packets are available for ten dollars. The packets will include the rules and a portion of the rules were reviewed. Cindy Graff then took over to introduce this year’s challenge presentations with the theme Just Add Color. Judges for the theme categories were Kelli Esbenshade and Kathy Cunnigham for the twenty-nine projects which were presented to the guild members.

After the quilt showing and story time a break was given to allow members to inspect and vote for the Viewer’s Choice Award.

Ms. Ullmer passed a form containing the slate of candidates for Vice President and Secretary for the November guild election. There is also a proposed change to the by-laws which were available to members or may be found on the web site. An opportunity to sign up for Stitches in Bloom was given with the guild having seventeen of twenty-five quilt registrations required to allow the sale of raffle quilt ticket sales at the event without a venue fee. Stitches in Bloom takes place at the Oregon Gardens in Silverton on January 27 and 28th, 2012.

Jean McDaniel reported that two new books have been added to the library and there are a few funds left if anyone has suggestions. The full library list is available on the guild web.

Service Committee reminds us that next month we will be tying quilts.

Jan Tallis advised that items for the next newsletter are due by October 28th.

Secret Sisters sign up have begun for 2012 with Jan Andrews-McKirdie passing around information and signup sheets.

Cindy Graff encouraged members to join in the round robin programs for 2012. The groups meet typically every other month.

Joan Helzer displayed the October block of the month and Linda Brown won the blocks. Next month’s block will be Christmas Package.

Hospitality hostess Debbie Garvin conducted the drawing for our prizes with her name being drawn for fat quarters and Theresa Preddy winning the JanniLou gift certificate.

The 2011 Raffle Quilt Drawing was led by Shirley Strub with the winner being Hank Weitz .

The 2012 raffle quilt top, Sunset Over Mary’s Peak, was displayed by Theresa Valentine.

Most Creative Color Name was presented to Jan Andrews-McKirdie.

Best Use of Fabric was Marianne Johnson.

Viewer’s Choice as selected by the guild went to Cindy Graff.

Ms. Ullmer reminded that our next meeting is November 17th, bring an ugly fabric to exchange and the meeting was ended at 8:50 PM.

Look what I saw in Portland this week at the
Machine Quilters Exhibit...
Click Images to Enlarge: 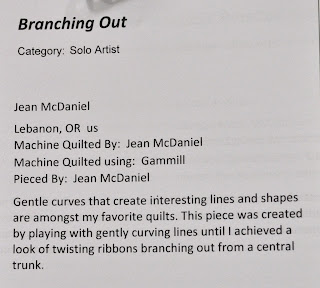 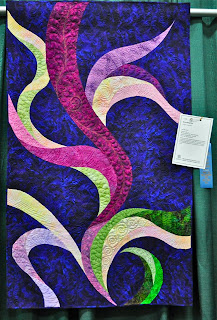 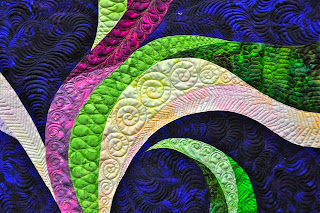 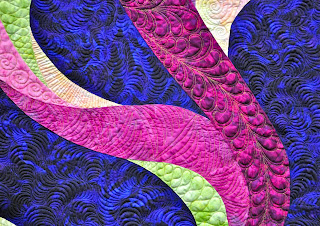 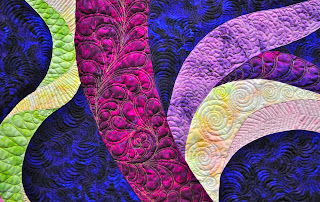